Update: We are pleased to welcome Caryl Moll to the blogging team. Caryl is a member of the congregation who is a talented writer and experienced blogger bringing her gift of observation and reflection on how God reveals Himself through daily life, especially through His amazing creation. We will now be regularly featuring blogs from Caryl amongst the pastors’ blogs and posts from other guest authors. Since it is no longer just the pastors writing blog posts, our blog is now titled the “NHCF Blog” to acknowledge this greater breadth of collaboration. If you have a story or reflection you would like to share we’d love to feature them. Please send any submissions to graham@thenewharvest.org.za

A Nostalgic Reflection by Caryl Moll

I first encountered Jesus before I ever knew I had.

I was born into my very own Eden – a small farm nestled in the lush Limpopo valley. My parents were busy people and took their task to provide for our family very seriously. This allowed me time to explore the vast rolling fields, the thick bush, the resident wild animals and the beautiful mountains that hedged us all in. It was the perfect setting to discover my risen Lord although I didn’t understand it fully at the time.

I first encountered Jesus in the lay of the African landscape; the wonderful vistas; the sunrises; the sunsets and the wonderful views from the branches of high trees. I knew I had a special place in it all. I walked endlessly, climbed rocks and trees and mountains. I relished my childlike freedom and sang freely.

I first encountered Jesus as I lay on the rough lawn outside our home and took in the glorious expanse of the sky. And I marvelled at the bright stars, the moon and the works of God’s fingers. Who was I that He was mindful of me? And the comet that came to visit but was so far away that it was hardly visible. God had given me a glimpse into the magnitude of our galaxy. 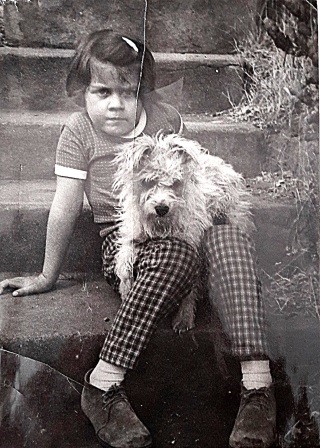 I first encountered Jesus in the early morning dew – where silver droplets hung from a million grass fronds and His sunlight sparkled through their fragile frames adding sustenance to the ecosystem.

I first encountered Jesus in the grasshoppers that I caught. I felt the pulse of life as I clasped them tightly and giggled as they pushed against my palm. Like me, they also wanted their freedom. I marvelled at the termites that I hunted; at the honey that I harvested and at the strawberries I stole from my father’s orchard. It was all so beautifully designed and it was God that did it!

I first encountered Jesus in the little bean garden that I grew; where I was able to reap the fruits of my efforts and sample their flavours. In this, I understood what it meant to nurture and labour.

I first encountered Jesus in the rustling wind that sang psalms through the tin roof of our farmhouse; and in the crazy thunderstorms that battered against its walls.

I first encountered Jesus in the old eyes of the dog at my heel. Like a sheep, he followed my every move and oozed devotion. I remember his soft fur and hot breath as he eagerly panted in my face asking for direction. We both felt God’s presence in the biscuits we shared as we sat and took in our Eden.

I first encountered Jesus in the breeze of the valley as I ran at full sprint with the same dog. I remember my hands outstretched; the feel of the grass catching in my fingers and the freedom of it all.

I first encountered Jesus when I felt the gratitude of the milk cows as their tongues eagerly wrapped around the long grass shoots I offered them. Fervent tugs at my gifts allowed me to share their joy. I watched as they chewed the sweetness of the grass over…and over…and over again. Who had gifted the grass, I wondered?

I first encountered Jesus as I drew my first shapes in the dirty sand and marvelled at the joy of being able to create something new. It was the opportunity to ponder the mysteries of life. I stooped and examined the delicate design of the antlions’ homes and how they suddenly disappeared. I only later realised that they had earned their wings.

I first encountered Jesus high on the mountain, by the waterfall where Purple-crested Touracos shouted out their hollow call. It was there by the stream that I wondered if I was allowed to baptise myself?

I encountered Jesus too in the horror of death; of animals going to slaughter and farm ‘pets’ who suddenly appeared on our dinner table. I began to understand the fragility of life and the concept of ‘dust to dust’. Jesus was there to comfort me in these moments and hug me deeply. Nothing really needed more explanation.

And yes, I recognised Him in books too as my imagination soared and my childish dreams took shape. He became very real during my bedtime prayers. When restless nights arrived, it felt like He was keeping vigil over my bed. As my fears dissipated, I was left comforted, not abandoned.

Yes, in that early, somewhat lonesome childhood, Jesus was very present. He was the blood that ran through my veins and the music I heard in my ears. My childish world spoke of His love, His care and His joy in me. His glorious creation enthralled me too. Even then I understood that He was with me before I even knew Him. His ways had been laid deeply in my heart… the perfect preparation for my adult life that waited.

My Lord, my God, I give you praise and honour for your works. I am fearfully and wonderfully made. I know it full well.

Truly I tell you, anyone who will not receive the kingdom of God like a little child will never enter it.” (Mark 10:15)

Food for the Journey: Simplicity