I was 8 years old and filled with the childish anticipation of Christmas morning. My parents were still asleep and the sun was only just rising behind the farm’s mountain.

I sneaked out of bed and tiptoed down the dimly lit passage towards the family room in our old farm house. That’s where the Christmas tree was…

Did Father Christmas come last night? Did he bring my bear? Did he get my letter?

I peeped around the corner and gasped when I saw the wrapped presents under the little Christmas tree.

But it was disappointment that gripped me. There were only a few little gifts under our tree. Tears welled as I stared at them. I didn’t want little ones. I only wanted ONE gift….one BIG one!

“They are too small” I whispered to the little dog at my side. “I want a BIG Teddy bear! One that I can sit on,” I lamented. “Those presents are all far too small!”

I had a friend at the time – Sherryl – who lived in the local village. She had a HUGE Teddy Bear like the one I wanted. It filled the corner of her bedroom. When I visited her, we would take turns to sit on the big bear’s lap and read story books. He was a beautiful bear – huge and cuddly – and a regular visitor to my childish dreams. I really wanted a big bear like Sherryl’s.

But the gifts under the tree, that Christmas morning, did not hold any hope. I turned my back on them and ran to wake my parents. Tears streamed down my face. It was not the Christmas I’d anticipated. 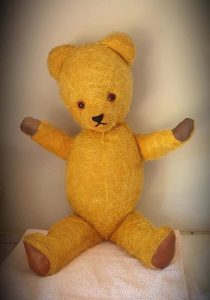 I now understand what my parents sacrificed in order to afford that small, wrapped bear that lay under that tree that Christmas morning. They weren’t exactly rich. In later years, I finally understood that they had saved for many months to gift me my little “Teddy”.

My childish response was understandable at the time, but must have hit them really hard. My father particularly, because he’d bought “Teddy” for me.

A couple of weeks back I finally plucked up the courage to give him his long awaited surgery. He had a bath too. 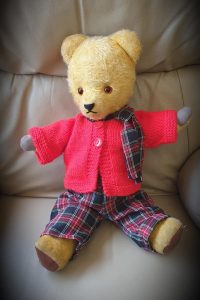 Loving God with Our Mind

All Things Bright and Beautiful