Many years ago, as a young mother of two girls, I attended a sculptured cloth-doll-making course. My girls were still small and the “wonder of babies” was uppermost in my mind. I managed to organise to join a group of women on a Tuesday evening to begin our much-anticipated six-week tutorial.

The atmosphere was alit with anticipation. Our materials included stretchy fabric, polyester stuffing, fur-fabric for the hair, fabric paint, embroidery cotton (for the eyes) and a long needle which was going to be used to ‘sculpt’ the doll and shape its features from the inside-out. Very complicated.

Over the next few days, we cut out the pieces of fabric carefully – specifically according to the pattern and gingerly stitched them together. Then we began the painstaking task of stuffing the dolls and assembling their limbs to enable them to be fully movable. 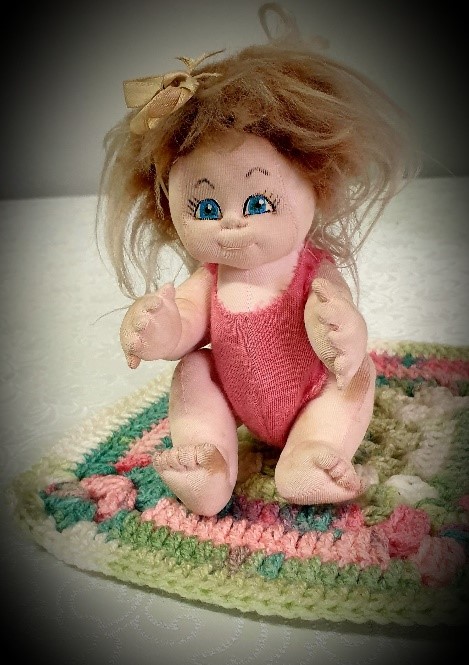 Once the body was prepared, we began the tricky task of creating the doll’s various features. This was done with a long needle (from the inside, out). It required immense concentration to shape their cheeks, mouth, eyes, dimples, fingers, toes and knees. We even gave them nostrils. Then we added their hair and painted their eyes. I watched, in awe, as each doll seemingly came to life in front of us. It intrigued me that, despite using the exact same pattern for the dolls, they all looked totally different. Each one had its own little ‘personality’. Finally, we placed a tiny white dot in their eyes – ‘to give them light and life’.

It took a long time to craft these dolls. The one in the above photograph was my own personal masterpiece – the smallest of the many I made – and the most cherished. I have admired it over the years and marvelled at the whole process. The truth, however, is that I enjoyed every doll I made. They became symbolic of my own creativity and artistry. In all honesty, I would have loved them no matter what they looked like… I was simply overjoyed that I was able to make them. To be able to create something from “seemingly nothing”.

I cannot help but feel an echo of God’s creativity in our own efforts as human beings. Think about it. Imagine how the Creator must have felt when He had put the final touches on us. He too must have marvelled at the final product and taken delight at how we came to life. I realise that the differences between the Lord’s efforts and mine are hardly comparable, but I am acutely aware that perhaps He felt similar satisfaction at the end of it all.

Consider then how He must have admired His handiwork and marvelled at the vulnerable human being which He held in His hands.  I know that He would have loved us no matter what. Flaws and all! Indeed, He must have enjoyed every bit of His creation. The ultimate feat, however, must have been the life that He breathed into us all – a mystery which has puzzled every scientist and ordinary human being at some stage of their lives. Like any parent, He must have had immense hope for our future. Afterall, He’d put us in charge of everything He’d created on this earth (Genesis 1:29,30). We know that His response was:

Today, I invite you to join me as I reflect on the magnificence of God’s Creation – all the creatures, plants, animals, insects and, of course, us. Imagine what He must have felt when He sat back and reflected on His handiwork. Perhaps you, too, would like to pause for a moment and simply respond:

“I praise you because I am fearfully and wonderfully made;
your works are wonderful, I know that full well.”
(Psalm 139:14)

Online KICS (Kid’s In Christ’s Service) lessons premiere at 8:00am on Sunday on our YouTube Channel.

This website uses cookies to improve your experience while you navigate through the website. Out of these, the cookies that are categorized as necessary are stored on your browser as they are essential for the working of basic functionalities of the website. We also use third-party cookies that help us analyze and understand how you use this website. These cookies will be stored in your browser only with your consent. You also have the option to opt-out of these cookies. But opting out of some of these cookies may affect your browsing experience.
Necessary Always Enabled

Performance cookies are used to understand and analyze the key performance indexes of the website which helps in delivering a better user experience for the visitors.

Analytical cookies are used to understand how visitors interact with the website. These cookies help provide information on metrics the number of visitors, bounce rate, traffic source, etc.

Advertisement cookies are used to provide visitors with relevant ads and marketing campaigns. These cookies track visitors across websites and collect information to provide customized ads.

Other uncategorized cookies are those that are being analyzed and have not been classified into a category as yet.