“A mighty fortress is our God” Martin Luther wrote these words as well as the tune around the year 1528. This was a time of great danger. It seemed as if the leaders of the Reformation could be killed at any moment because of there faith in God and there proclamation of the Gospel. 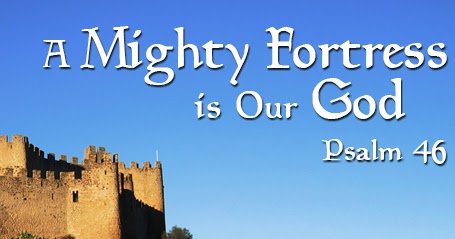 Martin Luther’s close friend Philip Melanchthon, was particularly worried about it all but Luther responded to him in a letter:

“With all my heart I hate those anxieties you have stated in your letter that you seem to be consumed with. They rule your heart . . . by reason of the greatness of your unbelief in God and His plan of Salvation. What we have shared and Believe is true, so why should we make God a liar who has given us such great Promises and who commands us to be confident and not be anxious despite the days we live in… What good do you expect to accomplish by these vain worries of yours? God is in control irrespective of the circumstances we find ourselves in.”

This is also true of the days in which we live with the Pandemic and Lockdown. But the Lord knows the Beginning from the End. God is in control and just like He was able to Create the Heavens and the Earth, He is also able to uphold His Church in these difficult times. If we are not strengthened by His Promises in His Word, then we need to Rebuild our Faith in our Soverign God to whom these promises apply.

The World often does seems to be out of control – particularly in these days, with so much uncertainty about the spread of COVID-19, and the economic effects of the steps taken to limit its spread.

Psalm 46 is written for times like 1530 – and for times like 2021. Let me encourage you to read this Psalm. Consider verses 1-7 together under two headings, and then verses 8-11 under a third.

1 God is our refuge and strength,
an ever-present help in trouble.
2 Therefore we will not fear, though the earth give way
and the mountains fall into the heart of the sea,
3 though its waters roar and foam
and the mountains quake with their surging.

4 There is a river whose streams make glad the city of God,
the holy place where the Most High dwells.
5 God is within her, she will not fall;
God will help her at break of day.
6 Nations are in uproar, kingdoms fall;
he lifts his voice, the earth melts.

7 The Lord Almighty is with us;
the God of Jacob is our fortress.

8 Come and see what the Lord has done,
the desolations he has brought on the earth.
9 He makes wars cease
to the ends of the earth.
He breaks the bow and shatters the spear;
he burns the shields with fire.
10 He says, “Be still, and know that I am God;
I will be exalted among the nations,
I will be exalted in the earth.”

11 The Lord Almighty is with us;
the God of Jacob is our fortress.

1. Is Everything Falling Apart?

In 1530, Melanchthon was worried that everything was falling apart. Today, the coronavirus leads to similar feelings.

The psalmist pictures those feelings. In verse 2 he speaks of “the earth being being removed,” and “the mountains being moved into the sea.” Indeed, the “waters of the sea roar and are troubled, and the mountains shake with its swelling” but “There is a river whose streams shall make glad the City of God” v4

To understand these expressions, it’s helpful to remind ourselves of Gods creation in Genesis 1. Before God works, darkness is over the face of the deep waters. There is nothing but water. On the third day, God gathers the waters into one place, the sea, and commands dry land to appear.

So note: in Psalm 46 God’s work is being reversed! The mountains – the dry land that looks most powerful, most secure – are moved back into the sea. God ordered creation; now disorder seems to reign.

Verse 6 tells us, “The nations rage, the Kingdoms were moved.” The physical order is being moved and shaken, and thus is falling apart; just so with the political order in our World today.

But the Psalmist exhorts us in verse 2, “WE WILL NOT FEAR.”

He then enforces that in the Promises of God in this Psalm.

In the creation God imposed order on the World. In Psalm 46, God shows His people that while all may appear to be returning to chaos, He still rules. He still governs. And He secures His people.

Verses 1-7 tell us of three ways that God secured His people at that difficult time – ways that He continues to secure His people today:

This is the primary message of this Psalm.

He is our Refuge – that is, He shields us from danger. He is our strength, empowering when we feel weak. He is not only a help, but a present help, right beside us, in our presence; He never leaves us nor forsakes us.

To enforce this point, verse 7 is repeated in verse 11: The Lord of hosts is with us, the God of Jacob is our fortress. With Him we are secure. No enemy will defeat us. No danger can destroy His plans and purpose for our Lives.

So the first way that God secures His people: He is always with us.

The second way that God secures His people: He stabilises us.

Remember, verse 2 speaks of the mountains being moved into the sea, and verse 6 (literally) of the kingdoms being moved. But verse 5 tells us that since God is in the midst of the city, “she shall not be moved.”

Even if both the created order and the political order are falling apart – even if a new virus threatens our entire world – God stabilizes and secures His people. They do not slip, do not fall, do not stumble.

The third way that God secures His people: He controls the dangerous forces

Verse 6 is my favorite in this Psalm: “The nations raged, the kingdoms were moved, He uttered His voice, the earth melted” (Psalm 46:6)

In the midst of chaos and political upheaval, in the midst of war and betrayal. In the midst of disease and disorder all falls before Him. He doesn’t organise His people into an army to fight the enemy, though He could; He doesn’t send lightning and wind and hail to destroy them, though He could. Rather – just like during the time of Creation – He speaks – and His will is done. His Words all by themselves are mighty and powerful.

Though all around you may seem out of control, or may seem to be falling apart, God is in control. He is never out of control. He only has to speak – and that chaos, that opposition, is over and done with. So when we see chaos continuing, when we are hurting and perhaps discouraged always keep in Heart, Mind and Soul *A MIGHTY FORTRESS IS OUR GOD* He is Almighty, He is in control of all.

So Psalm 46 tells us that today God’s people are His City, surrounded by His FORTRESS.

May the LORD bless you and keep you in these days of Lockdown. It’s time to sing with me this great Hymn of the Faith. The words are very appropriate for His Church at this time:

A Mighty Fortress Is Our God

A mighty fortress is our God, a bulwark never failing;
Our helper He, amid the flood of mortal ills prevailing:
For still our ancient foe doth seek to work us woe;
His craft and power are great, and, armed with cruel hate,
On earth is not his equal.

Did we in our own strength confide, our striving would be losing;
Were not the right Man on our side, the Man of God’s own choosing:
Dost ask who that may be? Christ Jesus, it is He;
Lord Sabaoth, His Name, from age to age the same,
And He must win the battle.

And though this world, with devils filled, should threaten to undo us,
We will not fear, for God hath willed His truth to triumph through us:
The Prince of Darkness grim, we tremble not for him;
His rage we can endure, for lo, his doom is sure,
One little word shall fell him.

That word above all earthly powers, no thanks to them, abideth;
The Spirit and the gifts are ours through Him Who with us sideth:
Let goods and kindred go, this mortal life also;
The body they may kill: God’s truth abideth still,
HIS KINGDOM NEVER FAILETH

In the Love of the Lord Jesus,
John and Barbara 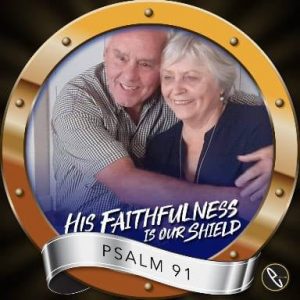